The Honorary Chairmen of the RIAS BERLIN COMMISSION, Staatsminister Bernd Neumann, Minister of State for Culture and the Media and Ambassador William R. Timken Jr., Chief of the Diplomatic Mission of the United States of America, opened the meeting of the newly constituted RIAS BERLIN COMMISSION.

Ambassador William R. Timken Jr., Chief of the Diplomatic Mission of the United States of America, and Rainer Hasters, Executive Director of the RIAS BERLIN COMMISSION

Staatsminister Bernd Neumann, Minister of State for Culture and the Media

The Press and Information Office of the Federal Government / Press Release No.: 386 / Friday, October 31, 2008

The State Minister emphasized: “The Commission is continuing the cause of a transatlantic bridge of truth and democracy in RIAS-Berlin. It preserves the station’s journalistic tradition rooted in freedom and democracy and passes this heritage on to a new generation of journalists. In its role as a forum and a point of contact for broadcast journalists from Germany and the United States of America, the RIAS Berlin Commission is making an important contribution to revitalizing the intercultural exchange between Germans and Americans.”

The objective of the RIAS Berlin Commission, as laid out in an agreement between the Federal Republic of Germany and the United States signed in 1992, is to promote personal and information exchange between broadcast journalists. It supports radio and TV productions that contribute to mutual understanding between Germans and Americans. In addition, one radio and one TV production that have up to now not received funds from the RIAS Berlin Commission will be awarded a prize.

The Commission consists of ten members, five of whom are from the Federal Republic of Germany, and five from the U.S. State. Minister Bernd Neumann and the American Ambassador, William R. Timken Jr., are Honorary Chairmen of the Commission, which is chaired by Minister Counselor of Public Affairs, Dr. Helena Kane Finn. Members of the Commission include: Danforth W. Austin, Dr. Ingeborg Berggreen-Merkel, Erik Bettermann, Dr. Hildegard Boucsein, Dr. Melinda Crane, Henry Hockeimer, Barbara Kisseler, Guy Raz, and Michael Zenner.

RIAS Berlin, founded after World War II by the American government in the American sector of Berlin, was also received by listeners in the Soviet occupation zone and what was later the GDR. The station regarded itself as the “free voice of the free world.” After reunification, the station, still under American trusteeship, was integrated into the German broadcasting landscape. After the GDR became a part of the Federal Republic of Germany, RIAS Berlin and the former GDR station Deutschlandsender Kultur together became the cultural radio program DeutschlandRadio Berlin, which became a part of the independent national broadcasting company Deutschlandradio in 1994 under the name of Deutschlandfunk. Since 2005, DeutschlandRadio Berlin has been broadcasting under the name Deutschlandradio Kultur.

Staatsminister Bernd Neumann, Minister of State for Culture and the Media, underlined, that the former RIAS radio station and its tradition represents an important part of close German-American relations over the last decades. RIAS Berlin has played an important role in the fall of the wall and in making the German unification possible. It is important to remember these achievements of German-American cooperation. Without this cooperation the unification in peace and liberty would not have been possible. There are only a few institutions, which can carry on these ideas, and the RIAS BERLIN COMMISSION is one of them.

Ambassador William R. Timken, Jr. responded:
“Thank you, Minister Neumann, for your remarks. I am glad to note that you share my strong commitment to the RIAS journalism exchange program. As you know, I have promised Chancellor Merkel to do all in my power to promote the German-American partnership.

We believe that RIAS plays an important role in that mission.

As of this year, more than 1,000 journalists from Germany and the United States have participated.

I was very pleased to speak at the RIAS Award Ceremony this year, and to note the enormous crowd of over 400 well known journalists present.

Both U.S. and German journalists have praised the program. For the U.S. journalists, the independence of RIAS is crucial.

RIAS was created with equal German and U.S. contributions. USIA Director Ambassador Henry Cato and founding board member Henry Hockeimer were instrumental in the creation of this program. It was endorsed by the Bush and Kohl governments.

On behalf of our U.S. Mission in Germany, I would like to commend RIAS for the important work it has done to support our most important goal of strengthening the Trans-Atlantic partnership between Germany and the United States.”

“It is a pleasure to greet the Board in my role as Chairwoman of the RIAS journalism exchange program. Thank you, Minister Neumann and Ambassador Timken, for your statements on behalf of RIAS.

I wish to welcome the new members of the Board at our first meeting since the death of our esteemed colleague Jürgen Graf last winter. I look forward to working with all of you to promote the RIAS mandate to strengthen the German-American partnership through journalism exchange.

Over the past year, I have had the opportunity to meet with both the German and American participants in the program on many occasions. I have also sat on panels to evaluate the many talented German candidates for the RIAS exchange. I can personally attest to the very high quality of the applicants. I have also attended the international reunion of former American participants in the U.S.

Overall, I must say that the network of RIAS alumni is extensive on both sides of the Atlantic. It is enthusiastic and highly active in support of further German-American media cooperation. Senator Fulbright coined the rationale behind our most prestigious exchange programs — the promotion of “mutual understanding.” The RIAS exchange program has excelled in this regard.

Some of the most influential and respected German journalists such as Claus Kleber and Tom Buhrow have been close friends of RIAS. They have been duly recognized with RIAS Awards at our well-attended annual ceremonies. When I turn on the television or radio, I frequently encounter one of our alumni.

On the U.S. side, we have had such prominent and distinguished journalists as Ralph Begleiter among our fellows. We are pleased to have Guy Raz, a former RIAS fellow, as a member of our present Board.

Thanks to you all for being here today.” 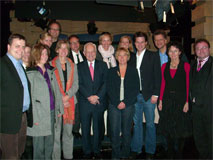 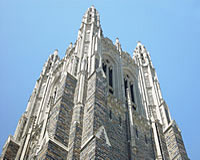 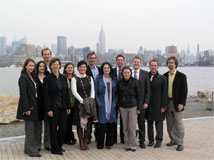 July 4, 2008
RIAS Fellows at the Opening of NEW Berlin US Embasssy

Three American RIAS Fellows attended the grand opening of the new United States Embassy to Berlin at its historic pre-war location at Pariser Platz next to the Brandenburg Gate. Though it started to rain thousands of Berliners and VIP-Guests, which included members of the RIAS BERLIN Commission, enjoyed the festivities and the glorious fireworks.