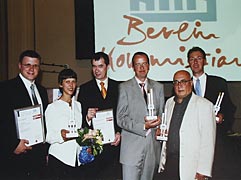 Among Arthur Landwehr’s numerous contributions to SWR’s 2-week focus U.S. program, his reports about the importance of religion in the American society are especially interesting to German listeners. In six relatively short spots he deals with “religion and consumption” in the United States (“which car would Jesus drive today?”). Topics include public demonstrations of religious conviction — e.g. saying grace in restaurants —, the self-financing of congregations employing professional business plans and the influence of religion on White House policy. The reports are straight forward, unbiased and very informative.

The jury also acknowledges the focus U.S. program itself, which broadcast numerous stories from many different reporters, thereby contributing to a better understanding of the United States and its population before the presidential election. The special commendation of focus USA includes particular mention of SWR’s website www.swr.de, where most radio reports supplemented by additional material were available on demand. The Remarks about a Partnership on SWR3 is an excellent example of radio programming supported by the internet.

In poetic audio flashes Monika Müller presents scenes of daily life in Germany — especially Berlin after the fall of the wall — to American public radio listeners. This award acknowledges her unique style, merging text and music to elicit a unified emotional effect. The short features combine sensitive observations with poetry and sublime irony. With these reports Monika Müller develops a new method of journalistic presentation.

Burkhard Müller-Ullrich ridicules German suspicion of American democracy with refreshing irony. His biting sarcasm is based on the irregularities of the 2000 election in Florida with the close margin of victory for George W. Bush. The author wittily suggests the only possible solution: the Germans themselves should elect the US president in the future. With his unusual and very personal commentary, Müller-Ullrich promotes better understanding of American politics.

This documentary uses the rise of the Bush-clan to the top of American business and political life as an example of the influence of family dynasties on public life in the US. The Bushes also became part of the social aristocracy starting with the grandfather of the current president a wealthy entrepreneur and conservative republican senator. Many incidents illustrate how close cooperation over three generations has resulted in an impressive network of power which has so far produced two presidents and two governors.

The focus here is on George H. W. and Barbara Bush. Although this is not a detailed political analysis this comprehensive film does not omit the dark chapters in the career of president George W. Bush. Without prejudgment this captivating documentary uses archival footage to illuminate an important period in US political history.

On The Air — Over There (Part III) (AFN Europe)

The military station AFN (American Forces Network) quickly became the voice of the American way of life for the German population and a “must-hear” for the post-war generation throughout Europe. American music – forbidden in Nazi-Germany– was the medium and the message. Many German radio stations eventually adopted AFN’s casual programming style. Over the years the station became an important news source beyond the American target audience. When the AFN headquarters in Frankfurt/ Main were closed, the authors – with diligence and sympathy – produced this nostalgic documentary on the station’s history, personalities and popular programs.